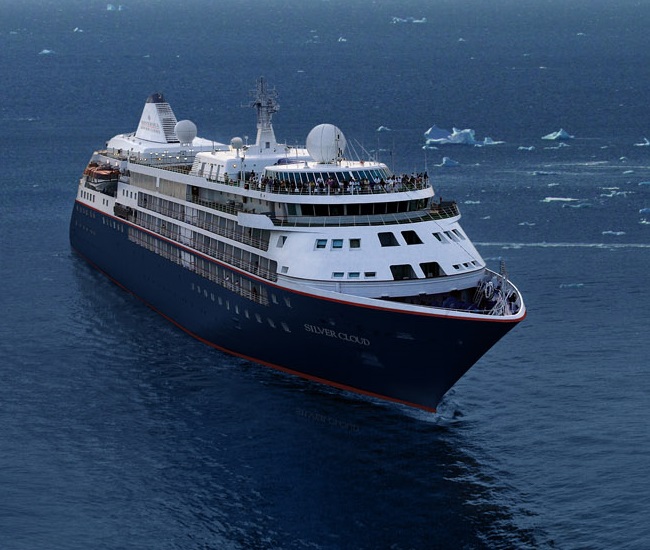 With 20-brand new Zodiacs, four superlative restaurants in Antarctica and a pole to pole expedition itinerary, Silver Cloud really does break the ice between expedition and luxury.

The capital city of Algeria and the most important Mediterranean port
of northwest Africa, Algiers has a population of over 3 million, making
it the largest population centre in the country. Algiers is located on
the Mediterranean coast, set against forested mountains and overlooking
a bay. Once one of the most romantic cities in Africa, encompassed by
the legendary whitewashed Casbah, Algiers is now a major modernized
city with all the metropolitan trappings.

Algiers is the site of Icosium, a legendary city founded by 20
companions of the mythical hero Hercules. Icosium remained a small
coastal trading post throughout the Phoenician and Carthaginian eras.

The modern city of Algiers is formed of two parts. The lower part is
the French-built new town with wide boulevards, and all the cultural trappings of colonialism — an opera house, cathedrals, theatres, museums, galleries and cafes. The new town is also the site of the
city’s educational institutions including the University of Algiers.
The Casbah or old city forms the upper part of Algiers, replete with labyrinthine passageways and a 16th century walled fortress.

With the growth of the population and emigration from the countryside
since World War II, suburbs have spread beyond the perimeters of the
city. Algiers forms the hub of Algeria’s transport links: the main international airport is there; all roads and railway systems emanate from Algiers; and it continues to be a major Mediterranean shipping
centre.

Portugal is for explorers. Its valiant seamen first charted the Azores, discovered Japan, and unlocked the major sea routes the world over. Now you can share the anticipation they must have felt as you explore this exciting city.

You’ll discover an 8th-century Moorish castle, quaint cafes and a palm-studded coastline. The Alfama district is a maze of narrow, twisting streets, whitewashed houses, flowered balconies, archways, terraces and courtyards that charm your socks off. (And if you can find your way out of this dizzying array, 20th-century Lisbon is just as intoxicating.)

Of course, if you’d rather play by the sea, the Portuguese Riviera lies just outside town, offering something for everyone, from sun, sand and surf to thrilling casinos. Lisbon is a vast garden abounding with flowers and tropical plants. The city’s appeal lies in the magnificent vistas from its many belvederes and in the tree-lined avenues and squares decorated with mosaic pavements.

Motril, Spain, is located near the Guadalfeo River on the Mediterranean coast in the province of Granada. Sugar cane refineries form the backbone of Motril’s economy, though tourism is also an essential industry.

An ancient capital of the Algarve, Portimao is near the mouth of the River Arade, which is crossed by a fine new road bridge. There are many excellent restaurants and shops in the town. On the western side of the mouth of the river itself is Praia de Rocha, the oldest resort in the Algarve.

Prices are per person, cruise only, based on double occupancy. Offer subject to availability and change without notice. Certain restrictions may apply.